Hiking up to the Roque Nublo

Hiking up to the Roque Nublo

The Roque Nublo is for Gran Canaria what the Teide for Tenerife or Timanfaya for Lanzarote: a place of reference for all those who want to know the most natural and authentic face of the island.

Sometimes, in the planning of La Tejana we make an excursion to the town of Tejeda with a hike up to Roque Nublo. One of the walks that I like the most.

After approximately 45 minutes by car from La Tejana, we arrive at the car park located at the foot of Roque Nublo, on the road that goes down from Tejeda to Ayacata. From here we start our journey by the simplest route.

It is a road that although it is done without any difficulty, we must 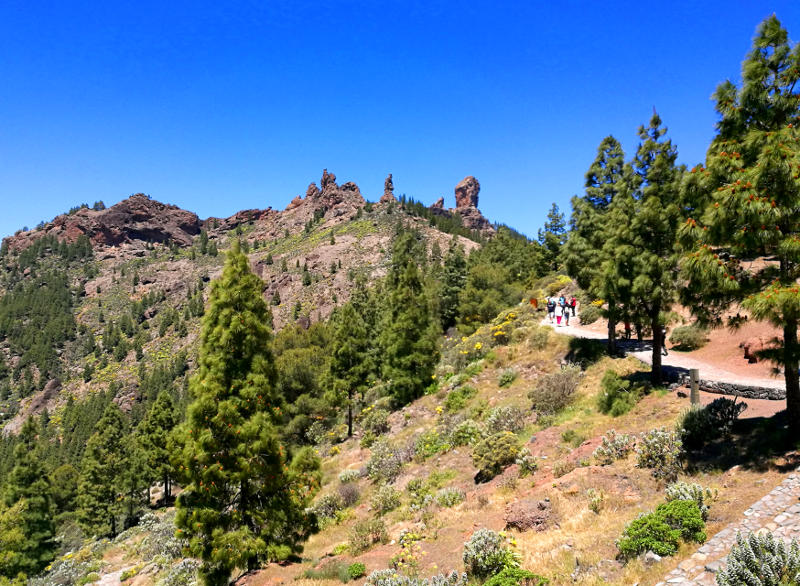 clarify that it is a climb, rising for just over a mile, from 1470 m. up to 1813 m. of altitude. Those with less physical shape will have to make some stops to get some air. However, it only takes 45 minutes to reach the top and it offers views that are worth not just one, but many stops along the way.

As soon as we take our first steps, we will see that it is a very touristy route, not only because of all the signs and explanatory panels that we will see, but also because of the number of people we usually find on the ascent and during the descent. 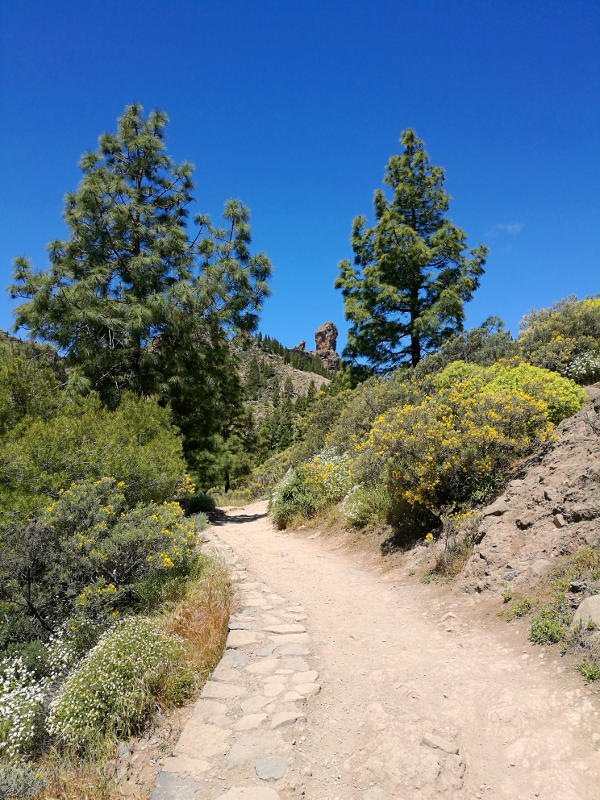 We begin to climb an artificial dirt-dust trail. From the beginning we already have a pine forest from which we do not lose sight of both Roque Nublo and Roque del Fraile, named for its peculiar shape reminiscent of a friar with his clothes. At this altitude it is normal to see among the branches of the pines examples of the blue finch bird of Gran Canaria and the famous Canarian picapinos or woodpecker. It is also common to see eagles, kestrels and hawks in the sky.

Once the dirt track is finished we enter a carved climb in the mountain that makes its way between pine trees and rocks with many steps that facilitate the ascent. We will also find some alternatives to the trail that are less steep and more inclined but that allow us to shorten the path if we wish. On this path, the number of black tajinastes we can see is surprising. Wherever you look, you see one. In addition there is also a large amount of canary sage and bushes of rockroses and shrubs, bushes and plants that in spring color the mountain with its beautiful white and pink flowers.

in the area. But as today we will focus on climbing the Roque Nublo we will continue climbing up the S-70 path, which is the one that interests us, until we reach the 'Degollada del Roque Nublo' at an altitude of 1709 meters. It should be noted that the last stretch before reaching this point is a very steep slope with loose soil that if not done with caution or appropriate footwear can cost us some slip, especially in the descent.

In the 'Degollada del Roque Nublo' we have to stop obligingly to enjoy the spectacular views of the summits of Gran Canaria before continuing with our climb for the last and funniest stretch of the road; an achievement of stairs, walkways and walls to circumvent that, although they are done in a totally safe environment, they make us grab the walls at some other occasion.

Once we reached the esplanade of Roque Nublo, with its peculiar lunar aspect, formed by the remains of different volcanic eruptions with more than 4 million years old, we can walk freely towards the monolith. However, first we will have approached both sides of the cliffs that flank the land, to enjoy one of the most spectacular views of Gran Canaria, only surpassed by the views of the caldera of Tejeda, Llanos de la Pez and Pozo de las Nieves from the base of Roque Nublo.

Before finalizing our ascent walking around the base of the Nublo, we have to make a mandatory stop in the Roque La Rana, so called because its silhouette reminds a lot of that of a frog. From here we can also see some splendid views towards the west of the island. Even if the day is clear we can see the village La Aldea de San Nicolás and the island of Tenerife. Behind them there is a small cave that once housed the image of 'the Virgen del Roque Nublo' and that now people use to sit down and take a snack to recover energy.

After you have relaxed contemplating the majestic Roque Nublo with its height similar to a building of 22 floors; after having filled your lungs with the pure air that the place offers you and having spent the memory of the mobile with endless photographs of the views, you just have to undo the path and continue to let your senses enjoy till the end of the way down.

If you want to come with us and know this and other emblematic places of Gran Canaria, check out the two special yoga retreats we have prepared for this summer, 'Hiking Week' and 'Charming Villages' by clicking here.