Since 2016, it has been noticed in Las Palmas de Gran Canaria that the relationship between city and tourist is taking more strength and firmness. Every time I walk around the city I see more tourists and at the same time more infrastructures focused on their service.

The city grows and it does so thinking about its citizens and also those who come to visit to know and feel this city full of life.

It is undeniable that Spain and the Canary Islands have always been a tourist reference at European level, but since 2016 the interest of many media and tourist websites has focused on Las Palmas de Gran Canaria.

In the city we can find many places that offer us different alternatives to satisfy us. Apart from sun and beach, you can nourish your culture, surprise yourself with its architectural monuments, relax in its nature, rejoice in its cuisine, enjoy its many sports alternatives or distract yourself by doing shopping.

I would like to take advantage of our blog to write

about some of these places, so in this first article, of many others, I am going to talk about Las Canteras. The beach of Las Canteras covers 3 kilometers of coastline that you can take advantage of for recreation, that is, where you can bathe. It also has a passable avenue of just over 5 kilometers. At this point I must indicate that, although commonly the entire portion of coast is known as Playa de Las Canteras, the islanders distinguish at least 8 different areas: El Lloret, Los Muellitos, La Cícer, Peña de la Vieja, Playa Chica, Playa Grande, La Puntilla and El Confital. If you want to spend a day getting to know the beach, a good alternative is to start, for example, at the Alfredo Krauss Auditorium. 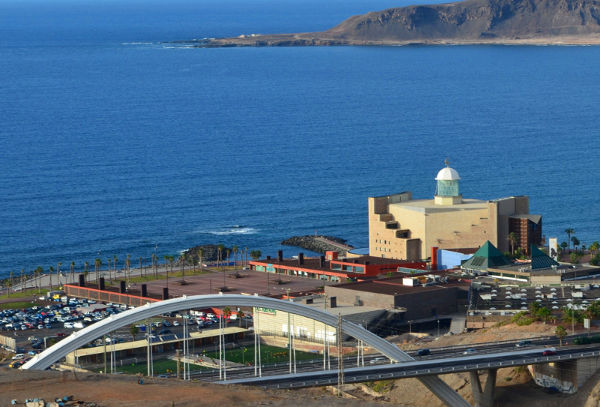 Before starting to walk east, it is recommended that you take a walk around the auditorium, strolling through the Plaza de la Música you can see the beach of El Lloret, known for being part of the circuit of surf world championship. You can also see the headquarters of the Philharmonic Orchestra of Gran Canaria and, of course, the Alfredo Krauss Auditorium itself that stands in the form of a giant castle on the avenue next to the monument in honor of the artist.

As soon as you start walking it is mandatory that you stop to take a look at the La Cícer area. You can spend some time watching people surfing in the area where the biggest waves of the whole beach rise. There are many surf schools around here, so it will not be unusual for you to see people of all ages starting out in this deeply rooted sport on the island.

As you walk you will realize that the sand becomes increasingly blonde and the sea more and more calm. If you look closely you will begin to recognize a kind of rock formation that rises several dozen meters from the seashore: La Barra, a formation of rocks and sand in the shape of a reef that protects a large part of the beach from the waves and that makes bathing on the beach from here a calm experience when the tide is low.

If you have already seen La Barra, it means that you are in the area of ​​Peña de la Vieja or Playa Chica. These are the most familiar areas of the beach. Those of us who live here usually choose these places to enjoy our beach days. If you want to mix between us and feel one more, I recommend that you go down to sit in the sand for a while and just watch and listen.

From here, when you get to Playa Grande, you will see that suddenly the beach becomes huge and that the activity begins to be more focused on tourism: areas of hammocks, terraces, shops and hotels that dot this area of ​​the avenue with a certain subtlety that does not get to disfigure the natural essence of the beach.

From here to the Plaza de Saulo Torón, in La Puntilla, if the tide is low, it is very common to see people walking in the sand, or doing paddle surfing or snorkeling, all highly recommended activities if you finally decide to spend the rest of the day on the beach.

The end of the avenue runs in a genuine way

through the neighborhood of El Confital. When you thought that the avenue was over, you discover a metal catwalk that will take you down to another paradisiacal and wild part that has become an icon of surfing, since it is said to have one of the best waves in Europe; besides being also part of the surfing world championship circuit.

From here, you will have to undo part of your steps to enter the neighborhood of La Isleta, emblematic place of the city, where the customs of the most deeply rooted population of the capital are mixed with the cultural wealth provided by neighbors from other countries.

During your entire trip you will have been able to enjoy one of the best urban beaches in the world, the presence of street artists, sand sculptors and bronze sculptures along the avenue. You may even have taken something in the crowd of terraces on the avenue or even dodge some motivated runner of the dozens who are lucky enough to be able to play sports every day in this jewel of the city.